The central component of the DCI standard is the Digital Cinema Package( DCP), a container that contains the image, sound and subtitle data. Due to the container format, the DCI standard can also be used for other content. Specified resolutions are 2K and 4K for the horizontal direction. 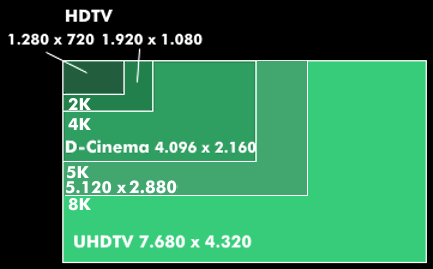 A comparison with classic analog film technology shows that the resolution of the 4K standard, at eight million pixels, is twice as high as that of classic technology; the refresh rate, on the other hand, is the same for both systems at 24 Hz. From these values, an uncompressed data rate of 5.07 Gbit/s is calculated for an image resolution of 24 bits. For the compression of the image data, the Digital Cinema Initiative (DCI) has chosen Motion JPEG 2000. The data is stored in containers in Material Exchange Format( MXF).

The Society of Motion Picture and Television Engineers( SMPTE) has specified the SDI interface for serial transmission of these data streams at a data rate of 2.97 Gbit/s. For audio, all 16 audio channels are stored individually and uncompressed at 24 bits in Broadcast Wave Format( BWF), which is based on Waveform Audio File(WAV). The first six channels can be used for surround sound according to 5.1, with two more Sony Dynamic Digital Sound( SDDS) can be emitted.

Special measures are dedicated to protection against unauthorized access in the DCI standard. This includes the Advanced Encryption Standard( AES), which secures data and Transport Layer Security( TLS) for data transmission.

Ultra-HDTV( UHDTV) is another cinema technology with an image resolution of 7,680 X 4,320 pixels, the 8K standard.