The structure of the containers can be relatively simple as in Audio Video Interleave( AVI), which consists of the header, the video and audio data and the trailer. Other structures are much more elaborate and include fields for embedding subtitles, for fonts, texts, markup information, images and forms. For audio and video applications, different compression files for audio and video reside within the container. For example, Real Networks' RealMedia container format contains containers for RealAudio and RealVideo streams, Microsoft's Advanced Streaming Format( ASF) contains Microsoft's proprietary audio and video formats, and MP4 containers can contain video streams, audio, audiobooks, ringtones, and other files. 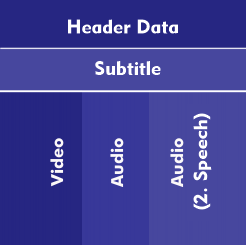 Structure of a container