In order to be able to distinguish between the individual 802.3 implementations, the interface designations are subject to a special Ethernet nomenclature. This nomenclature indicates the transmission speed and the transmission type - baseband( BASE) or broadband (BROAD). Depending on the Ethernet version also the segment length, the distance or the application range. The first value of the interface designation is that for the transmission speed in Mbit/s, specified as a numerical value (10, 100, 1000) or as a numerical value with a prefix (10G, 40G, 100G). 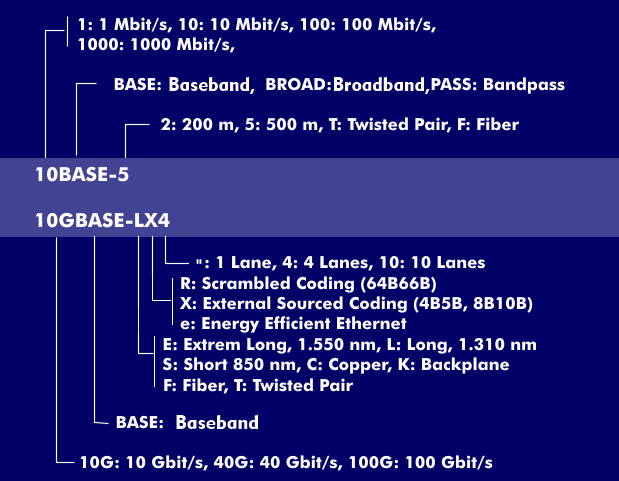 According to this notation, the 10 stands for 10 Mbit/s and the 10G for 10 Gbit/s. This is followed by the transmission method BASE or BROAD, followed by a digit, a letter or letter-digit combination which indicates the transmission medium and the distance length. For the classic Ethernet, the digits 2 and 5 stand for a segment length of 200 m and 500 m, respectively. A classic Ethernet interface with a data rate of 10 Mbit/s, in baseband and a segment length of 500 m thus has the following designation: 10BASE-5. The corresponding twisted pair interface is called 10BASE-T, with "T" for twisted pair, and the one for optical fiber 10BASE-F, with "F" for fiber.

This nomenclature cannot be maintained for interfaces for higher data rates because different optical fibers, wavelengths, wavelength division multiplexing and transmission methods with multiple lanes are used in these.