SRAMs are used in all caches, such as Level 1 caches, L2 and L3, and can retain the stored data without a classic refresh with periodic refresh. Unlike refresh technology, SRAMs operate with a low quiescent current from a battery buffer. The quiescent current accumulates over the many SRAM cells to a higher current. The memory cells of SRAMs are addressed by their memory address. 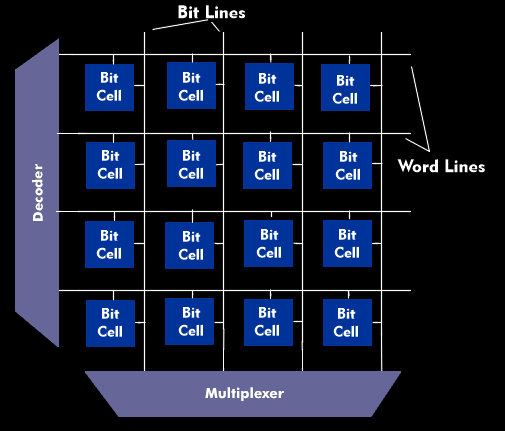 Organization of an SRAM or DRAM memory chip

Static RAMs use flip-flops as memory; in contrast, Dynamic RAMs store the digital values in MOS capacitors. Each individual bit is represented by a flip-flop. In this constellation, a transistor acts as a switch instead of the CMOS capacitor. It represents the positions "0" and "1". The stored data is not erased when it is read out and continues to be retained even after retrieval. The memory cells can assume three different states: standby mode, reading out, and storing data. Since SRAMs do not require refresh, they are much faster than Dynamic RAMs (DRAM). The access time is in the range between 8 ns and 20 ns, and the clock frequency is 500 MHz.

Special versions of SRAM such as PipelineBurst SRAM( PB SRAM) have access times of 4 ns to 8 ns and a burst cycle of 3-1-1 for bus speeds of 133 MHz. This means three clock cycles for the first word and one clock cycle for each of the following words.

SRAMs can be designed in Ball Grid Array( BGA) with 85 connection pins and are used as Level 1 cache.