Serial ATA (SATA) is a hard disk interface. It is a further development of parallel ATA( PATA), with which it is backward compatible. It was introduced by Intel in 2000 and is characterized by a much higher transfer rate, as well as the improvement of cabling.

The development of the SATA interface

The first version SATA 1.5 Gbit/s has a data transfer rateof 1.5 Gbit/s, which corresponds to a data throughput of 150 MB/s.

Data is transmitted via a thin, flexible 7- pin cable that is only 8 mm wide, does not have to be terminated and is up to one meter long. One pair of wires each is used for signal transmissionin the transmit and receive directions, and three other wires are grounded and arranged to separate the transmit and receive lines. On the SATA connector, an eighth unused pin serves as an anti-twist protection. Due to the maximum length of one meter, this cable offers sufficient free space for cabling within large computer housings. 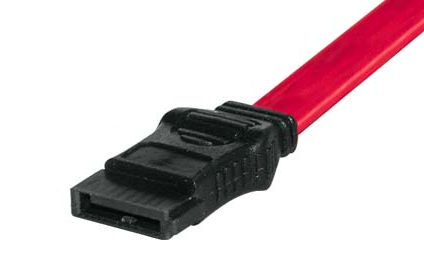 The signal voltage is only 250 mV and extremely low compared to that of PATA, which is 5 V. An 8B/10B encoding is used and only one bit is transmitted per clock signal.

The connection of peripheral devices

With SATA, the connection ofperipheral devices is done as a point-to-point connection, where each device is connected to its own port of the host adapter via its own SATA cable.

SATA is operating system independent and offers hot plugging. The SATA interface has a lower data transfer rate compared to the SAS interface and is ideal for nearline storage and RAID systems.

The SATA 3 Gbit/s version, introduced in 2005, doubled the data rate from the first version to 3 Gbit/s, as well as the data transfer rate, which is 300 MB/s. This version is also known as SATA 2 or SATA II. The Serial ATA International Organization (SATA-IO), which drives standardization, has adopted a naming convention in which the designations SATA 2 or SATA II are no longer to be used. This also applies to the SATA 6 Gbit/s development introduced in 2009, which is also referred to as SATA III or SATA 3.0.

SATA 6 Gbit/s (SATA Revision 3.0) is characterized by a data transfer rate of 6 Gbit/s. Theoretically, 750 MB/s can be transferred with this. This data rate is reduced to 600 MB/s by the 8B/10B coding. 600 MB/s can be transferred with the 6 Gbit/s version. The 6 Gbit/s version can also be connected via the 7-pin SATA cable. However, a higher quality cable is recommended. A LIF connector is provided for miniature hard disks.

In addition to the development of faster SATA versions such as SATA Express( SATAe), Samsung and the JEDEC have standardized Mini-SATA( mSATA), a smaller SATA card for solid-state drives( SSD) that runs on the Mini PCI Express and is suitable for use in notebooks and netbooks.