Advanced Technology Attachment (ATA) is an industry standard from ANSI for a data bus with 16 bit bus width for parallel hard disk interfaces. The signal behavior and the IDEbussystem are described in the standard, which specifies the connection to an AT bus.

IDE-ATA cabling of the drives in a PC

In addition, the LBA method was introduced under ATA-2, which supports larger storage capacities of hard disk drives. PATA works with a master- slave bus and can address two hard disk drives with one ATA controller each

The version ATA-3 had the same data transfer rate but extended safety functions against hard disk failures. In this version, which is also used in conjunction withATAPI, the fast data transfer was improved, diagnostic functions were extended with SMART and password protection for hard disks was implemented.

With ATA-4, other mass storage devices such as CD and DVD drives were also taken into account. The UDMA protocol was also added, which increased the transfer rate to 33.3 MB/s. Furthermore, the 80- pin interface cable was defined under ATA-4, which is backwards compatible with PIO and DMA.

With ATA-5, which was extended by the UDMA protocol mode 4, the transfer rate could be increased to 66.6 MB/s. ATA-5 uses the 80-pin ribbon cable to increase transfer reliability 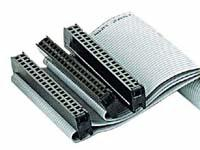 With ATA-6 or Ultra ATA/100, the data transfer rate is increased up to 100 MB/s in DMA mode. In addition, in ATA-6 the LBA address is increased from to 48 bits in order to circumvent the limitation of the memory size of 137 GB per hard disk.

In addition to the standardized ATA versions, there are also proprietary versions. One of them is Ultra-ATA, as counterpart Ultra-DMA. Ultra-ATA supports transfer rates of 33 MB/s, 66 MB/s and 133 MB/s.

A further development of Parallel-ATA, which has exhausted its limits in transfer rates and may only have a limited cable length of under 50 cm, is Serial ATA, SATA.