A pyrometer is an infrared thermometer used to measure the temperature of thermal radiation without contact. In general, every object emits infrared radiation. All bodies whose temperature is above absolute zero.

Pyrometers detect the infrared radiation of objects. The central component of a pyrometer is an infrared sensor or pyrosensor made of pyroelectric crystals. The infrared sensors used have their highest spectral sensitivity in the infrared range between wavelengths of 1 µm to 20 µm. For better utilization of the thermal radiation, there is a converging lens in front of the infrared sensor which is used to focus the thermal radiation on the IR sensor. This can be a Selfoc lens or a Fresnel lens. Depending on the heat radiation, the IR sensor generates an electrical voltage by means of pyroelectricity, which is amplified by a highly sensitive amplifier and further processed in the downstream electronics. The processed heat signal is shown on a display and can be used for visualization on thermal imaging cameras or for controlling other components. 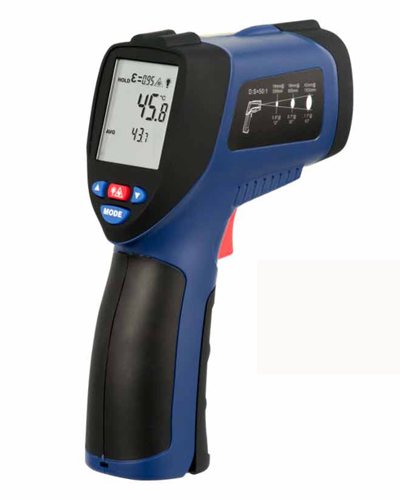 Pyrometers can measure temperature between -50 °C and +3000 °C on solids, in liquids and in gases. The measured value measured with pyrometers is composed of the self- emission of the measured body, the reflection by external radiation and the radiation by transmission. This is the thermal radiation that penetrates the body.