While a Micro-USB connector has fixed functions for each pin, only two of which are available for data transfer, the Lightning interface's pins adaptively serve to transfer data or power. Being fully digital, the Lightning connector also contains a chip for communication between two devices. The connected devices are recognized and the flow of power and data is directed via the correct pins. Since no pin is permanently assigned a function, the Lightning connector can be plugged in on both sides, whereupon the pins are assigned accordingly. 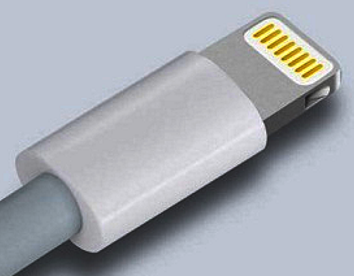 If two connected devices support Lightning technology, the transfer of data as well as audio and video signals is significantly faster than with USB interface 2.0. Charging a mobile device on a Macintosh or Windows computer is also completed faster than with a micro USB connector.

The Lightning connector cables supplied by Apple have a port for USB 2.0 in addition to the interface. With a 30-pin adapter, older accessories such as chargers, speakers, solar charging covers, midi adapters or medical measuring devices can continue to be used on devices with the Lightning interface.