Cordless telephony( CT) has only a short range of between 50 m and 300 m and is therefore used almost exclusively in the private end- user sector. Cordless telephones are terminals in which radio transmission replaces the cable between the handset(handset, PU) and the telephone (fixed part, BS). The development of cordless telephony knows analog and digital transmission and different modulation techniques.

The specifications of cordless telephony

In 1983, the standardization of first generation cordless telephony( CT1) was started within CEPT. Predecessors of this standard were vendor-specific solutions known as CT0. The final CT1 standard was adopted in 1984 under CEPT guideline T/R 24-03. CT1 operates in a frequency range of 914 MHz to 915 MHz for transmission from the handset to the fixed part, the uplink, and in the range 959 MHz to 960 MHz in the reverse direction. The channel spacing is 25 kHz, so that 40 duplex channels can be transmitted at a frequency spacing of 45 kHz with FDMA. The transmit power of the analog modulated signal is a maximum of 10 mW, which corresponds to a range of 50 meters indoors and 300 m outdoors.

To prevent unauthorized use of the fixed parts by third-party cordless phones, the standard provides for more than 1 million identification codes between the mobile and fixed parts for unique identification and is constantlychecked by inner-band signaling. Since the GSM standard, which was adopted later, also uses frequencies in the 900 MHz range and can therefore cause interference, it was decided by EC decision that cordless phones would no longer be allowed to transmit in the 900 MHz range until 2001. CT1 became the standard in various countries around the world, and variants with reduced channel widths exist.

The variants of cordless telephony

The first variant of CT1, developed by Deutsche Telekom, is CT1+. This standard has twice the number of channels, 80, and transmits in the uplink at 885 MHz to 887 MHz and in the downlink at 930 MHz to 932 MHz. Like CT1, CT1+ operates in analog mode with frequency shift keying. 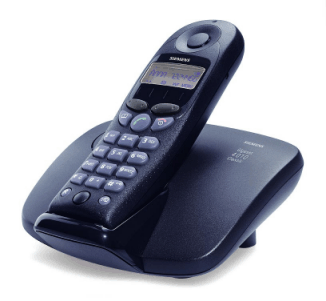 A second variant was developedin England, called CT2. CT2 was the first digital standard. The system operates in the frequency range from 864 MHz to 868 MHz, with forty 100 kHz wide duplex channels, and uses time division multiplex as the duplex method. For voice transmission, CT2 uses Adaptive Delta Pulse CodeModulation( ADPCM) at 32 kbit/s according to G.721. The transmission power of the hearing aid is max. 10 mW; the range is 200 m. CT2 can be set up with multiple cells and uses handover. In addition to pure voice transmission, data can also be transmitted at low transmission speeds. 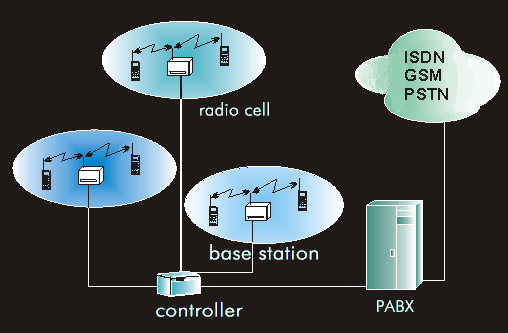 Another system variant for cordless telephony is the standard proposal for the CT3 system , introduced by Ericsson. This variant, which operates in the 900 MHz range, has not been standardized by the European Telecommunications Standards Institute( ETSI), but it forms the basis for the DECT system standardized by ETSI. The DECT standard was drafted in 1991 and officially adopted in 1992. DECT defines the air interface between the mobile handset and the base station, supporting both voice transmission and data transmission with flexible transmission speeds.

The standard defines a cellular mobile radio system for in-house communications for portable voice and data terminals for distances up to 300 meters. The transmission frequency band is between 1.88 GHz and 1.90 GHz. Within this bandwidth of 20 MHz, 120 channels are available. With DECT, channel selection is based on the TDMA method with dynamic channel assignment. This means that a mobile terminal selects the best channel and establishes the connection to the base station on this channel. The transmitting power is limited to 25 mW.

Cordless phones based on the CT standard could only be operated until December 31, 2008. After that, devices with the DECT standard had to be used.