Hearing aids, Hearing Aids, are miniature electronic devices that compensate for a congenital or later-onset hearing loss. They are acoustic aids to enable the hearing impaired to participate in daily life. Functionally, they are battery-powered audio amplifiers that receive speech and audio signals through a microphone, amplify it, process it, and transmit the sound directly to the inner ear of the hearing impaired person through a MEMS speaker or other miniature loudspeaker. The purpose of hearing aids is to amplify sound in order to improve speech intelligibility and directional sensitivity.

The electrical concept of hearing aids

Functionally, hearing aids must pick up sound waves, convert them into electrical signals, limit the level of these signals, amplify them according to frequency, and deliver them again as sound pressure. It is therefore an amplifier concept with frequency response boosts or cuts. Such a circuit concept can work analog or digital. 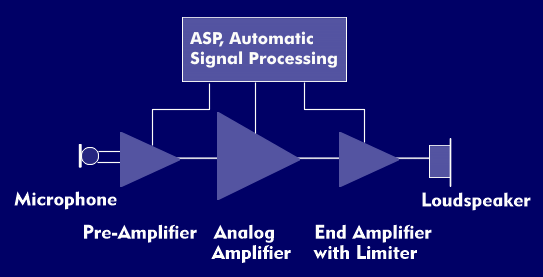 Structure of an analog hearing aid

In terms of electronic design, hearing aids consist of the basic components microphone, amplifier, loudspeaker and button cell. As far as the microphone is concerned, mainly condenser microphones or electret micro phones are used, in recent years also MEMS microphones. All these types of microphones can be manufactured extremely small, measuring only a few millimeters. The smallest microphones have dimensions of only 1 x 1 mm. Microphone preamplifiers connected downstream of the microphone amplify the microphone signals, which are only a few millivolts. In addition to signal amplification, gain control and frequency signal adjustments also take place here. Depending on the concept, the signal is boosted or attenuated in the high or low frequencies by means of Automatic Signal Processing ( ASP) with fixed - Fixed Frequency Response (FFR) - or level-dependent - Level Dependent Frequency Response (LDFR) - frequency response and limited in level in the power amplifier by means of Peak Clipping( PC) or High Level Compressor( HLC) and fed to the electrostatic or piezo loudspeakers. To prevent hearing damage, the electronics operate with automatic gain control( AGC) and limit the maximum output pressure( MPO). With AGC control, the input sound pressure and the output sound pressure experience separate level limits. As for audio compression, three different compression methods can be used: Compression Limiting( CL), Automatic Volume Control( AVC) and Wide Dynamic Range Compression(WDRC).

In digitally operating hearing aids, the microphone signals are digitized in an AD converter, processed in a Digital Signal Processor( DSP), filtered with digitalfilters and finally converted into analog signals in a DA converter for the loudspeakers.

Since hearing aids can be manufactured extremely compactly using modern manufacturing processes, there are versions with Bluetooth Low Energy( BLE). This allows signals from cell phones, smartphones and audio equipment to be transmitted directly to the hearing aid without being affected by ambient noise. 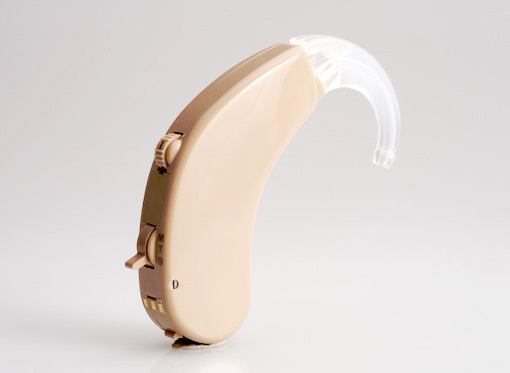 Behind-the-ear devices are worn behind the pinna, and the amplified sound is guided into the ear canal via a sound tube and an earmold. Because the function of the pinna is no longer in effect with behind-the-ear hearing aids, a BTE device receives sound from the front and back with equal sound pressure. Directional localization, which is otherwise performed by the pinna, is thus ruled out. 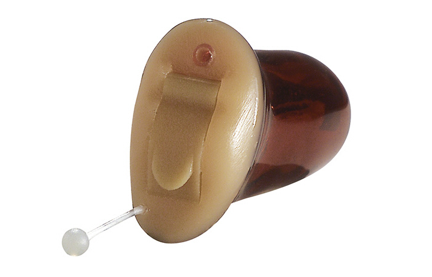 As far as the characteristic values of hearing aids are concerned, it is essentially a matter of the parameters that directly influence speech intelligibility. The intermodulation distortions caused by limiting circuits such as peak clipping or by compressions play a decisive role. So do the frequency response and the boosting and cutting of individual frequency ranges. The transient response and decay are further parameters related to the control behavior of the amplifiers, which influence speech intelligibility. The quality of reproduction is also strongly affected by extraneous noise. It is reflected in the signal-to-noise ratio. To separate sound signals from background noise, technical measures are taken to improve the Acoustic Overload Point( AOP), which is decisive for the overload. A further improvement in listening comfort is provided by Wide Dynamic Range Compression (WDRC), in which the compression depends on the sound pressure of the input signal.