Digital Enhanced Cordless Telecommunications(DECT) is divided into two versions: the version that operates in the frequency range between 1.88 GHz and 1.90 GHz, extended to 1.93 GHz, and upbanded DECT, which operates in the ISM band.

The version designed for cordless telephony has a bandwidth of 20 MHz with 120 duplex channels available for transmission. The 120 channels result from the ten carrier frequencies and the twelve time slots for transmission from the mobile station to the base station and twelve more in the reverse direction. A time slot has a duration of 416 µs, followed by a safety interval of 52 µs. 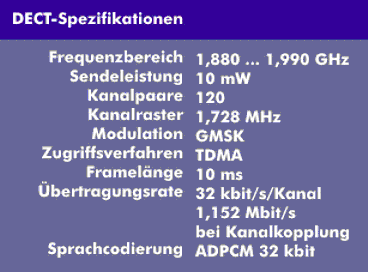 The DECT data frame comprises the synchronization, signaling and user data. The signaling data is secured by means of cyclic block checking(CRC), the 320 bits for the user data are unsecured for voice transmissions, but they can also be divided into four groups of 64 bits each for data transmission, each secured by 16 CRC bits.

The channel spacing is 1,728 kHz. DECT uses a combination of Frequency Division Multiple Access ( FDMA) and Time Division Multiple Access( TDMA) as the multiple access method for accessing the radio channels. The access method is dynamic; a mobile terminal selects the best channel and establishes the connection to the base station on this channel. The transmit power of the base station is 250 mW, but in pulsed form of 1/24 second. The transmitting power of the mobile station is about 10 mW on average. 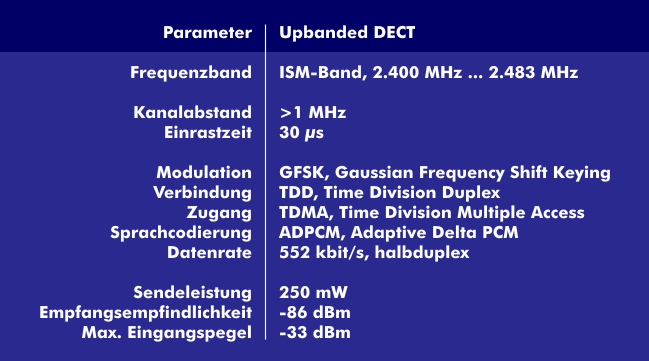 Voice coding is performed at 32 kbit/s in Adaptive Delta Pulse CodeModulation( ADPCM), albeit unsecured, while data transmission is secured at 64 kbit/s by combining two time slots. By combining several duplex channels, data rates of up to 1.152 Mbit/s can be achieved. The DECT Forum is striving to raise the data rate to 10 Mbit/s to 20 Mbit/s. As with GSM 900 and DCS 1800, modulation is in Gaussian Minimum Shift Keying( GMSK).

The upbanded version uses the entire 2.4 GHz ISM band. However, the channel spacing is >1 MHz and the resulting data rate is 552 kbit/s in half-duplex. Connection control is via time division duplex ( TDD).