PC Card is the name for the PCMCIA card introduced in 1995. It is a pluggable expansion card in the format of a smart card of 85.6 mm x 53.58 mm, which is often used in laptops and notebooks, but also in digital cameras and in components of wireless networks.

The PC-Card is available in three different thicknesses, with Type I with a thickness of 3.3, mm being used as a memory card for flash memory and SRAMs. The supply voltage for the PC-Card is 3.3 V and 5 V.

Type II, with a thickness of 5 mm,is used for network, modem or ISDN cards as well as Bluetooth wireless modules, and Type III is used for hard disk drives in subminiature design, such as IBM's Microdrive. Type III has a thickness of 10.5 mm and, in contrast to the other two card types, two 68- pin contact rows. 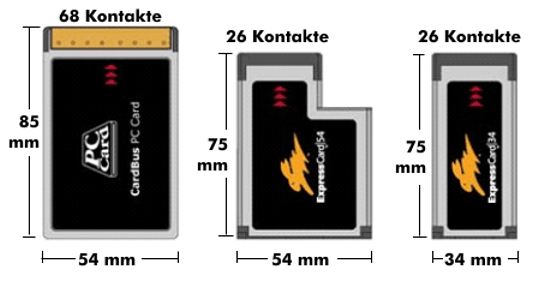 The PC-Cards can not only be used as network cards or memory cards, but also as receiver units for digital TV, DVB-T. The PC-Card is connected to the device via the PC-Card bus, which has a single-row or double-row connector strip with 68 pins. The successor memory card to the PC Card is the much smaller ExpressCard.