DVB-T channels have bandwidths of 7 MHz in the VHF range and 8 MHz in the UHF range and can achieve net data rates of between 4 Mbit/s and 31.6 Mbit/s per channel, depending on the transmission and modulation method according to the ETS 300 774 standard. DVB-T channels can be fed into DVB-C without transcoding.

Television frequencies and bands for DVB-T in Germany

In Germany, DVB-T uses Coded Orthogonal Frequency Division Multiplex( COFDM) as the transmission method, quadrature phase shift ke ying( QPSK) and quadrature amplitude mod ulation( QAM, 16, 64) as the modulation method, and, since it is transmitted via common frequency networks, can also be received with rod antennas by mobile TV sets, which can be installed in cars, buses or caravans. Here, the reception quality, which is normally impaired by ghost images, is better than with analog TV thanks to Coded Orthogonal Frequency Division Multiplex (COFDM). 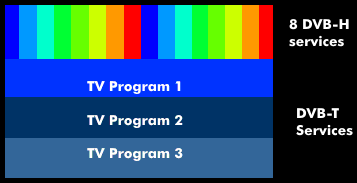 The sound is encoded in MPEG-1 Audio Layer II (MP2) at 192 kbit/s, and Dolby Digital is also transmitted. The two data streams generated from the video signal are multiplexed into an MPEG-2 transport stream. This stream consists of 188- byte blocks, preceded by a 4-byte header.

In addition to television programs, DVB-T broadcasts multimedia services such as teleshopping, telelearning, online banking, and regional guides. For the interactive distribution services, DVB-T provides a return channel with DVB-RCT. In addition, access to Internet services is also provided. Just as for the other DVB processes, an improved terrestrial variant DVB-T2 is also specified.