400 Gigabit Ethernet (400GbE) is a project initiated by IEEE 802.3 for a 400 Gbit/s Ethernet variant. Ethernet with data rates above 100 Gbit/s are referred to as Terabit Ethernet( TbE). This project is being dealt with in the IEEE working group 802.3bs. The high data rate of 400 Gbit/s is aimed at applications in data centers and at the transmission of video and ultra HDTV, which are increasingly being transmitted via the Internet and less frequently via satellite, broadband cable networks or radio. It represents the intermediate step for later terabit data rates.

Service providers have already picked up on this trend, offering high-speed Internet for video channels. They have also defined an optical transport network to cope with these data rates. As far as the required HD quality is concerned, many customers can access 60 Mbit/s in the connection area. The high data rates must be realized all the way into the data centers. Hence the 400 Gbps and, as far as the data centers themselves are concerned, the Next Generation Base-T( NGBASE-T). 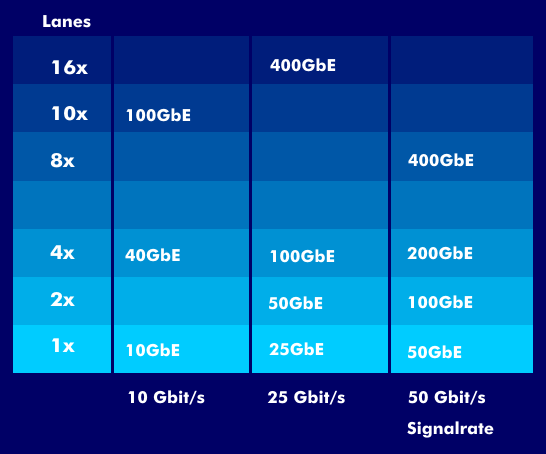 GbE constellations depending on the number of lanes