Short Wave Division Multiplexing (SWDM) is a wavelength division multiplexing technique used in Ethernet that operates with short wavelengths of light. Generally, Ethernet operates in the optical window at 850 nm over multimode fibers.

SWDM technology has been ratified by the SWDM Alliance. SWDM operates at four wavelengths of 850 nm, 880 nm, 910 nm and 940 nm, each generated by a VCSEL laser. Since the multimode fibers used in Ethernet are only suitable for the optical window at 850 nm, they are unsuitable for other wavelengths. For this, the attenuation values and the data rates are limited and not specified. SWDM technology therefore uses a broadband-optimized multimode fiber, Wideband Multimode Fiber(WBMMF), which complies with OM class OM5. 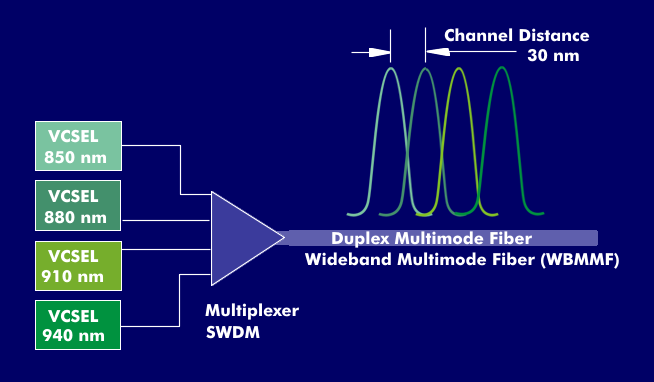