Socket is a communication endpoint used to exchange data and messages. Sockets are managed by the respective operating system and can exchange data between programs both within a computer system and across networks.

In the area of client- server architectures, sockets are the standard means by which servers distribute any services to a large number of clients. The communication is always bidirectional, e.g. the client makes a request for a website and receives an HTTP response which contains the HTML document as well as status information.

In the OSI model, sockets are located in the transport layer (layer 4), so they form the basis for the communication control layer.

Such a socket designates the logical endpoint of a connection and is defined by the data structure, the port, the IP address and the transport protocol - TCP protocol, UDP protocol, IPX protocol. This information is defined in the Protocol Control Block( PCB). 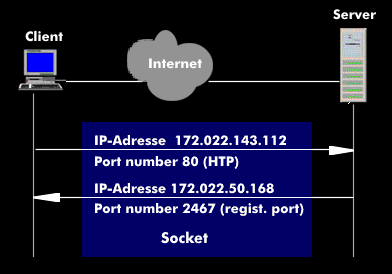 Socket, the combination of IP address and port number

Socket is a widely used LAN interface for applications on a network. Sockets are the basis for Berkeley's TCP/IP implementations. Even though the first implementation under Unix originated at Bekeley, sockets are not dependent on the operating system. Applications can be programmed distributed over the network using this programming interface.