The design ofcell phone keypads corresponds to the normal dialing keypads specified by the International Telecommunication Union(ITU) and is primarily used to enter the telephone number of the communication partner. In addition, cell phones have various keys for menu controland navigation, selection keys for services, and keys for establishing and terminating calls. 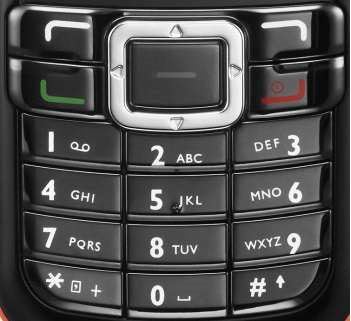 When a letter is entered, this is done by pressing the corresponding numeric key several times. How often this must be pressed depends on the position of the letter. For example, if the letter "F" is to be entered and the numeric key "3" is assigned to it, then the "3" key must be pressed three times because "F" is in the third position. This makes entering a word relatively time-consuming. For example, if the word itwissen is to be entered, then the keystroke looks like this: 4448944477773366.

Since the input is relatively laborious, there are programs that support a faster input, where each letter is entered with a digit. T9 is such a text input assistant, which works with statistically probability stored word inputs.