An exception is a class oferrors that occur during runtime. If no software measures are taken for these cases, this often leads to a crash of the entire software system. But also other unusual situations can be caught and even solved by a specific exception handling, so that the program can be executed afterwards.

The conceptual basis of exception handling takes into account that a situation in a low- level function generates an exception, this is passed on through the calling levels and is finally handled centrally by a piece of program code - the so-called exception handler. For exception handling, most programming languages such as C++, C#, Java, Eiffel, Ada, Python, Ruby, Delphi, or Scala, among others, provide appropriate mechanisms by default.

In a program or the runtime environment, such as the Java Runtime Environment ( JRE), situations can occur during runtime that are generally referred to as runtime errors and lead to an exception. These situations can have various causes, such as the entry of invalid values, an invalid division by zero, an unstable network connection, the printer running out of paper for a given print job, or the opening of a file that does not exist.

All these situations have one thing in common: If the error is not handled, they lead to the termination of the program. Situations of this kind are called exceptions, and must be recognized and handled during software development. The objective of this error handling is to enable the user of a program to continue the program, for example, by correcting his input, or, in extreme cases, to terminate the program after saving all necessary data. This form of error handling is also known as Structured Exception Handling.

When a runtime error occurs, it generates an error object that encapsulates the details of the error that occurred. This object searches within the runtime environment for an exception handler, which in turn receives the error object and takes care of handling it according to the requirements of the respective application. The exception can either be handled directly by the causal part of the program or forwarded. The recipient of the error object can then also either handle it or forward it to the level above. If an exception is not handled by any of the called methods, the software terminates in an undefined state

The different programming languages support similar concepts for exception handling. For example, in Delphi, an exception can be handled as shown

In the following, the concepts for exception handling with exceptions are explained in more detail using the Java programming language as an example, since this provides a good general understanding of the possibilities of exception handling.

An exception can be raised by the runtime environment or software-controlled by the developer of the software. At certain points in the software, the compiler expects that an exception handling is explicitly programmed. The throwing of an exception is called "throwing" and its handling is called "catching". Exceptions are only thrown within a method. Java provides the following constructs related to exceptions:

try. defines a block within which exceptions can occur.

throws Declares which exception can be thrown by a method. 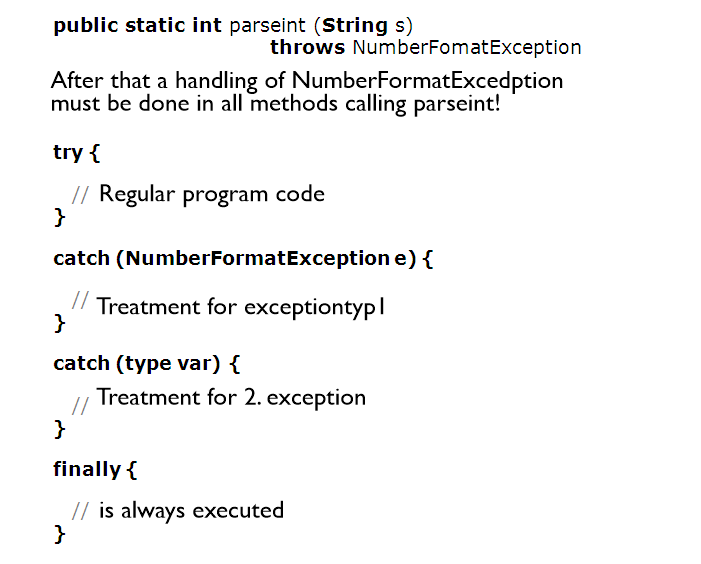 Example of Java constructs with exceptions

In this example, the compiler determines whether handling has occurred for the NumberFormatException exception: by including the exceptions in the method header, the compiler verifies that all exceptions are handled. This is different in Java than in C++, for example.

The concept of Java provides for the definition of own exception classes. In doing so, one derives a class from Exception or a subclass of Exception, which can then be used as well as all predefined exception classes:

Java, for example, has the ability to pass on exceptions in a program according to a defined mechanism. In this case, the passing method tells the compiler that the exception may occur but will not be caught by that method.

An interesting method is getStackTrace(), which belongs to the superclass Throwable. This allows access to elements of the stack, which makes a differentiated analysis of errors possible, since the sequence of calls of all methods up to the exception is made available on the standard console. The getMessage() and toString() methods of Throwable provide further information on exceptions thrown. GetMessage() returns a detailed message string for the exception, and toString() also returns the class name.
Advertisment
Informations:
Advertisment