An EDFA amplifier(Erbium Doped Fiber Amplifier) is a fiber amplifier for amplifying light signals. An EDFA amplifier is an optical fiber of several meters length doped with the chemical element erbium (Er), which behaves like a laser diode and is stimulated by optical signals.

The fiber laser is constructed like an optical waveguide with two cladding glasses, a double clad fiber( DCF), concentrically arranged around the core glass. The doping with erbium ions relates to the core glass and is used for optical amplification. When activated, it amplifies the optical light signals.

To realize the corresponding energy levels in the active fiber, a pump laser operating at 980 nm or 1,480 nm is used to supply optical energy to the fiber and bring it to a higher energy level. When signal photons arrive, the electrons fall back to the original energy level, in turn generating photons that amplify the incoming photons. The amplification is between 20 dB and 40 dB, and the output power is between 12 dBm and 25 dBm. The amplified light signal has a wavelength of 1,550 nm, covering the wavelengths in the 3rd optical window. EDFAs are broadband optical amplifiers that operate in the wavelength range from 1,530 nm to 1,625 nm, which corresponds to a bandwidth of about 4,000 GHz. 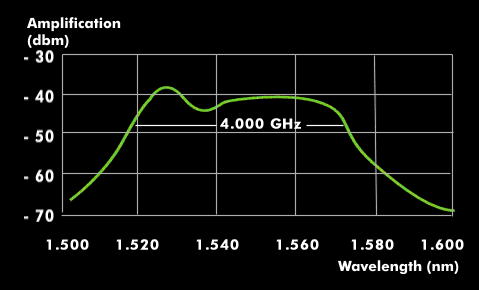 Gain characteristics of an EDFA

EDFAs provide direct amplification of the entire optical signal composed of multiple wavelengths, as in DWDM technology. It does not matter whether four, eight, sixteen or forty different wavelengths are present at the input of the optical amplifier. Distances of 120 km and more can be bridged using EDFA amplifiers. A further development of the EDFA amplifier is the EYDFA amplifier, in which the core glass is doped with two chemical elements - erbium and ytterbium belong to the rare earth elements.