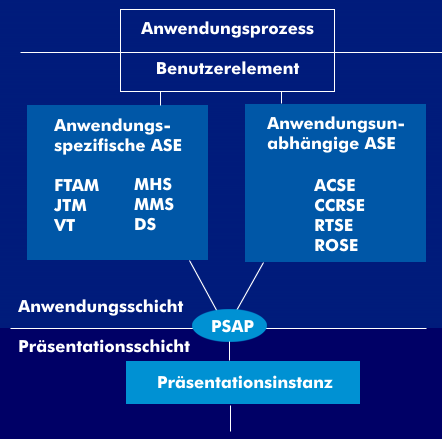 When structuring the application layer, however, it has become apparent that the separation between CASE and SASE is not always practical, since each application-oriented basic service not only implies its own data structure for layer 6, but also, for example, a specific directory and management structure. For this reason, the separation is dispensed with and we speak here generally of application service elements, but distinguish the application control service element( ACSE) and the user element in these. The Single Association Controlling Function (SACF) monitors the interaction of the Application Control Service Element (ACSE) and the local Application Service Elements, while the Multiple Application Control Function (MACF) is responsible for cross-systeminteraction. Other components relate to network management and system management.