Ad hoc networks are very powerful Self Organized Networks( SON), which are characterized by good load balancing and have no central management. In such network constellations, the end devices handle the routing and store the routing tables. Communication partners that connect to the network are dynamically integrated into the communication network. In WLANs and in Bluetooth, where piconets are pure ad hoc networks, all devices that enter the radio range of the piconet are automatically identified and are part of the network structure. 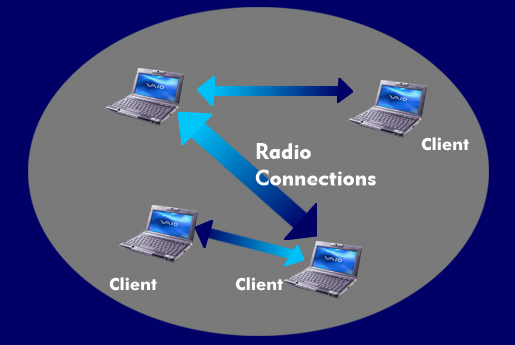 In these WLAN configurations, data is forwarded from one network node, which can be a notebook or a tablet PC, to the next network node until it reaches the addressed end device. If one end device fails, the function is taken over by another. Routing in ad-hoc networks is performed by the Ad-hoc On-demand Distance Vector( AODV).

Ad-hoc networks exist only virtually for a limited time, just ad-hoc, which means for a moment. They are used in WLANs and in sensor networks. Also in radio networks of emergency services, police and military.