Tablet PCs, or tablets for short, are extremely flat personal computers(PCs) similar in shape and size to a writing tablet, which is why they are also called tablet PCs. They are wireless, battery-powered and connected to the Internet via WLANs or UMTS. They also have Bluetooth for short-range communication. Since they do not have a mouse and keyboard, they are operated via the display, which is a touchscreen or multi-touchscreen. With LCD or OLED displays, input is done via a wireless input pen, and with touchscreens and multi-touchscreens with the fingers.

The displays of tablets are about the size of DIN A4, the resolutions are 1,400 x 1,050 pixels and higher, and the dot resolution is 100 dpi and higher. Tablet PCs have slots for memory cards, flash memory with 10 GB to 100 GB and a battery for continuous operation for several hours. In terms of processors, power-saving processors such as the Atom processor or ARM processors are used. Tablet PCs use Windows XP, Tablet PC Edition, Windows 8 and a modified version of the iPhone OS as operating systems.

Operation with finger and pen input on multi-touch screens

Tablet PCs, because of the absence of a keyboard and computer mouse, target applications that can be accessed and operated with the fingers, such as the playback capabilities of photos, videos, computer games, as electronic readers for e-books, and especially Internet applications. They have web browsers and thus offer the possibility of accessing the Internet via finger inputs. For acoustic playback, they have an array ofpiezo speakers, which works with beamforming in some devices, and a connection for headphones. Some are equipped with a microphone and video camera. They can be operated in portrait (Portrait View) and landscape (Landscape View) mode and have a gyro sensor, which is a position sensor that ensures that the screen content is automatically aligned according to the position. Program functions and apps are shown on the display and can be activated with the stylus or finger. 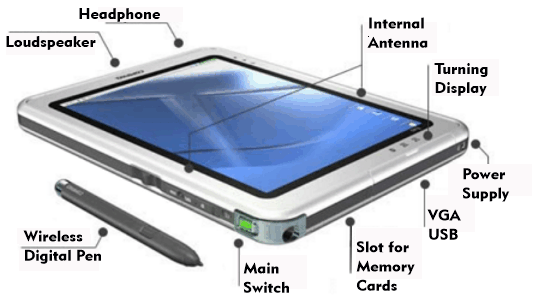 Functionality of a tablet PC with pen input, photo: HP

Devices with pen input often work with handwriting recognition( HRC), which is supported by the operating systems. With handwriting input, the user does not have to adapt his handwriting to certain recognition specifications. He can maintain his normal writing style because the software not only analyzes individual characters, but also the pen movement in speed and direction.

Wireless communication via WLANs and UMTS

Wireless communication can take place via WLANs according to 802.11b/g via the WLAN router, or via surfsticks or UMTS sticks with HSPA technology via the mobile network. 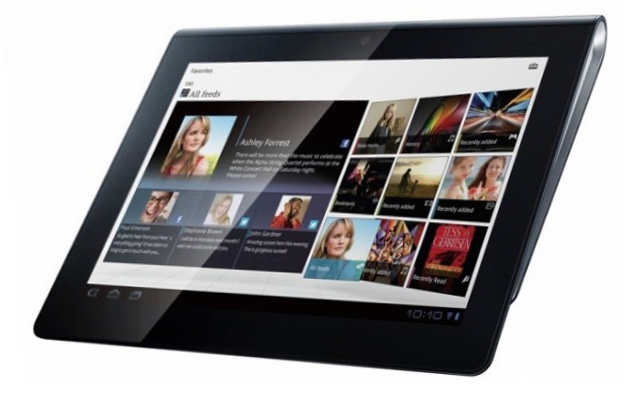 Tablets can be classified according to the different device forms. There is the Ultra Mobile Personal Computer( UMPC), a full-fledged portable microcomputer that can be used as a multimedia player, game console or webpad and is operated exclusively with finger input. Then there are the hybrid PCs with the 2-in-1 functionalities of a notebook and a tablet, with keyboard, touchscreen and rotating or folding display, and the ruggedized, tablets designed for heavier use and for adverse environmental conditions. Hewlett Packard calls its tablets Slate, which stands for slate. This group of devices works with pen input. Well-known representatives of tablets are Apple's iPad and the WebTab, and this species is also produced by many well-known computer manufacturers.

A genre of small computers that can be placed between smartphones and tablets are phablets, a word creation from phone and tablet.