The TCP header is the header of the Transmission Control Protocol (TCP). It is 20 bytes long and is directly based on the IP header. The following functionalities are assigned to the individual data fields of the TCP header: The port number of the sender or the receiver, via which the multiplexing of the TCP packets takes place. The sequence numbers of the sent packets for the virtual connection are entered in the sequence number data field. The acknowledgement number is used to acknowledge received TCP data packets.

The data fields of the TCP header

The Header Length( IHL) field specifies the length of the header in 32-bit words. This field is followed by the Control Flag field, where a total of six flags can be set: Urgent flag( URG), Push flag( PSH), Confirmation flag( ACK), Reset flag( RST), Synchronization flag ( SYN) and Final flag ( FIN). These flags are used for confirmation( CONF), pointer( PTR), instantaneous forwarding, resetting a connection, synchronization of the sequence number, and indication of the termination of the transmission. The following 16-bit data field Window is used for flow control. In the TCP protocol, it is a sliding window, a sliding window size where the receiving station's ability to receive is controlled by speed adjustment. 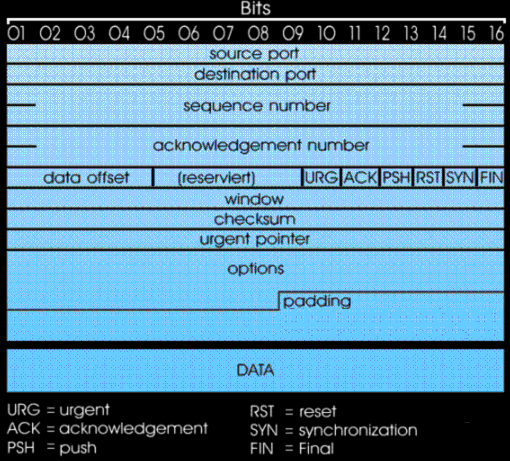 Structure of the TCP data frame

In addition, the TCP protocol places very specific requirements on the protocol of the network layer. For example, it must be able to send datagrams across a network, assign unique addresses to the partners, perform segmentation and reassembly of the data packets according to the respective network conventions, and transmit information about the packet sequence and security features.