Power7 is the successor to IBM's dual-corePower6processors, introduced in 2010. Power7 is a multi-core processor consisting of 4, 6 or 8 cores per chip, manufactured in 45 nm technology and characterized by clock frequencies between 3.0 GHz and 4.1 GHz.

Power7's L-3 cache, an eDRAM, has 32 MB and operates in multithreading. The processor cores are connected in Symmetric Multiprocessor Architecture( SMP) via the SMP interconnect. The computing power for the Power750Express is 1010 for the SPECint_rate_2006 specified by the Standard Performance Evaluation Corporation( SPEC), and is thus many times higher than that of the SPARC Enterprises.

The successor to the Power7 is the Power7+, which has eight processor cores, each of which supports four multithreads. The L3 cache has been expanded to 80 MB compared to the Power7. Power7+ is manufactured in 32 nm technology and consists of over 2 billion transistors. To accelerate encryption and security functions, the Power7+ has several coprocessors. In addition, the clock speed has been increased to 5 GHz. 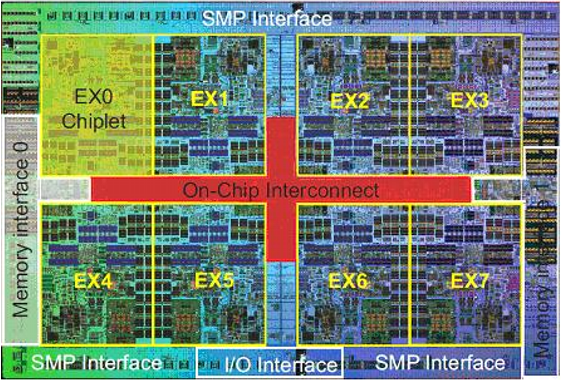 Structure of the Power7 with eight processor cores and SMP interface, photo: IBM

The processor is equipped with various energy-saving modes, which adapt the power requirement to the respective computing power called up. The eight processor cores are connected to each other via SMP interconnect. Data is transported at 360 GB/s via the SMP bus.