FlexRay is a time-triggered fieldbus that meets the requirements of safety-critical systems such as steering and braking systems in automotive technology. The FlexRay bus is a manufacturer-independent, open standard that is characterized by a high data rate, by fault tolerance, fail-safety through redundancy, guaranteed latency times and the predictability of the transmission cycle. 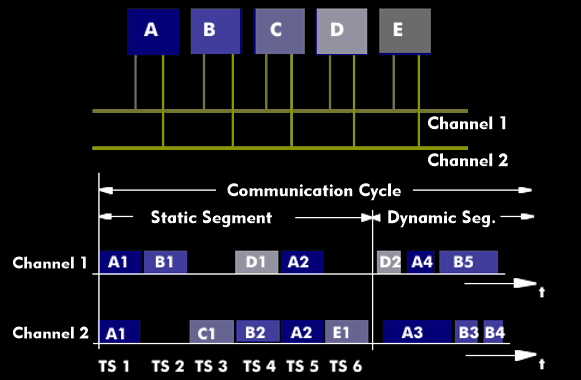 Both methods operate sequentially and on two completely separate channels. First, the static allocation of the time slots takes place, followed by the dynamic allocation, which only becomes active when an access takes place within a mini- slot.

Fieldbuses and WLANs in automotive technology

Since FlexRay is used in safety systems, redundant data can be transmitted via the two independent channels, but so can different data. For example, one time slot in both channels can be occupied with the same data, the following one with different data. The data rate of the FlexRay bus is 10 Mbit/s. Data is transmitted using the FlexRay data frame.

A FlexRay node consists of the processor and controller, the bus guardian(BG) and bus driver( BD). The bus guardian takes over the transmission control and provides the controller with the time slot in which the data is mapped. The bus driver corresponds functionally to the transceiver and provides the media access to the polymer fiber. FlexRay is further developed and promoted by the FlexRay Consortium, whose founding members were Daimler, BMW, Motorola and Philips.