Fieldbus is the generic term for various physically distinct bus systems for automation, manufacturing technology, building automation and automotive technology. These are wired or wireless bus systems with which field devices, i.e. sensors and actuators such as drives, switches, motors, actuators and lamps, are connected to the control devices and host computers and via which the fast exchange of data between the components takes place.

Fieldbuses usually operate in master- slave mode, with the master station controlling the processes and protocols and the slave stations handling the subtasks. 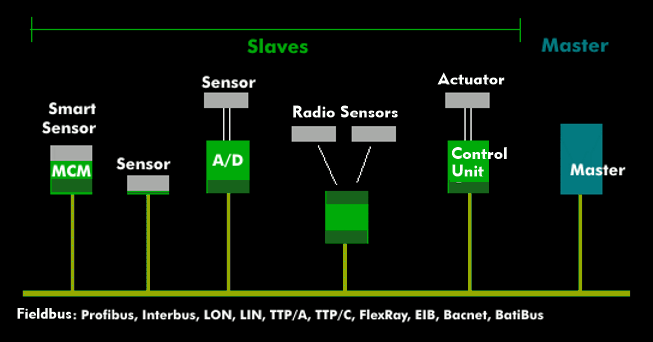 Structure of a field bus

The topology of fieldbuses

Fieldbuses differ in terms of their topology, their transmission media and have different transmission protocols depending on their design. A distinction is made between the message-oriented methods and the summation frame method. One of the better known protocols used in automation on fieldbuses is the Manufacturing Automation Protocol( MAP). 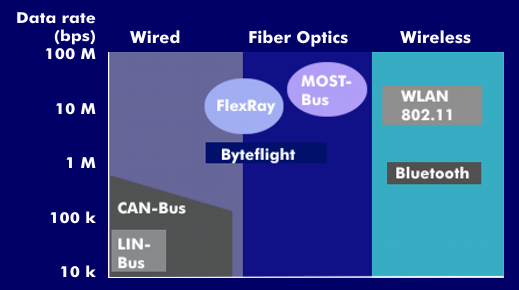 Fieldbuses and WLANs in automotive technology

Fieldbuses are subject to various national and international standards and adapt the layer structure of the OSI reference model. There is no common standard for fieldbuses; they are generally proprietary systems that are further developed and promoted by interest groups. In terms of topology, they can be structured like networks, namely in ring topology, tree topology, bus topology or star topology.

Fieldbuses are optimized for their field of application, so that there are various versions for plant engineering and automation, as well as for mechanical engineering, automotive technology, process and building automation.

Well-known fieldbuses are Interbus, Profibus, HART, Bitbus, I2C-Bus, Modbus, LIN-Bus, MOST-Bus, IDB-1394, TTP/A-Bus, TTP/C-Bus, BACnet, Batibus, VARAN-Bus and the CAN-Bus. In addition to these, fieldbuses based on the IP protocol, i.e. via Ethernet, are increasingly gaining acceptance. The classic transmission medium via copper cable, which was used in EtherNet/IP, EtherCAT, Ethernet Powerlink, DeviceNet, ControlNet and Sercos interface, is increasingly being supplemented or replaced by radio networks such as WiFi. The advantage of IP-based transmission is also that a high permeability of the data across the different process levels is ensured without having to convert the data.