The EC card is a credit card used for cashless money transactions. It has a microprocessor and used to have a magnetic strip on the back. This magnetic strip, which used to contain sensitive user data, was replaced by a chip years ago.

The user data previously stored on the magnetic strip, such as the user name and its account number, which is also the EC card number, the country code and the validity period, are now stored on the memory chip after the magnetic strip has been removed. When using the EC card, it is inserted into a card reader or an ATM through which the connection to the bank computer is established. 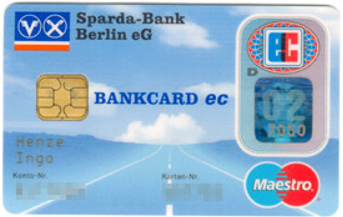 For verification purposes, the ATM compares the personal identification number( PIN) entered with an encrypted number entered on the EC card from the Card Security Number, which used to be stored on the third magnetic track. The DES algorithm is used as the encryption method. The actual transaction is secured by the PIN number.