A tandem solar cell is a multiple or stacked solar cell. It consists of two solar cells arranged one above the other, which make better use of the wavelength spectrum of sunlight and therefore achieve a higher efficiency. This is over 30 %.

Single- layer solar cells prefer certain wavelength ranges depending on the semiconductor material. For example, the highest light yield ofsilicon solar cells is in the wavelength range between 600 nm and 1,000 nm. In other words, in the red and infrared ranges. This means that blue light and UV light are not converted into electricity. It is different with multi-layer solar cells such as the tandem solar cell. It consists of different III-V compound semiconductors that have optimal band gaps for the different wavelengths. The top layer is made of crystalline silicon and uses the red components of sunlight for light output. Sunlight with shorter wavelengths passes through the silicon layer and hits the semiconductor layer below, which absorbs wavelengths in the blue and UV range and thus contributes to the light yield. Gallium arsenide( GaAs) and indium gallium phosphide (InGaP) are particularly suitable for wavelengths between 300 nm and 600 nm from ultraviolet to yellow. 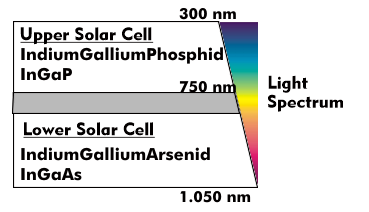 Structure of a tandem solar cell

In the triple-junction solar cell, three semiconductor layers are stacked on top of each other, each covering a different spectral range. They are constructed using thin-film technology and make optimum use of the spectral range of sunlight. Triple solar cells, in which the solar radiation is concentrated with Fresnel lenses, achieve efficiencies of 40 % and more.