A solar cell converts light into electrical energy and always generates DC voltage or current. It works according to the photoelectric effect, which is based on the space charge zone(RLZ) formed between a positively and negatively doped semiconductor.

The photoelectric effect as the principle of the solar cell

Solar cells work according to the photoelectric effect. They absorb photons, which causes charge carriers to be pulled out of the conduction band and jump the energy gap between it and the valence band, exciting the conduction band.

Structure of a solar cell 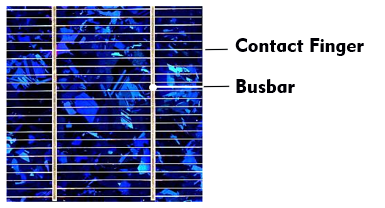 The direct current generated in solar cells is dissipated via front or rear contacts. These contacts are called contact fingers and are usually in the form of a grid. The current is passed through them to the busbar. The contact fingers have a width of between 50 µm and 100 µm. Several solar cells are joined together to form a larger solar module.

The silicon of the solar cells

The open circuit voltage (Vco) of solar cells depends on the semiconductor material. For silicon, the source voltage is about 0.5 V and is independent of solar irradiance. The current, on the other hand, increases with higher illuminance and can generate a current of up to 2 A at a solar irradiance of 1,000 W/m2. The relationship between the current and the voltage corresponds to the characteristic behavior of the solar cell and is shown in the I-V characteristic curve. From this characteristic curve, the short-circuit current (Isc), the open-circuit voltage, the fill factor, the maximum power point( MPP) and the efficiency can be obtained. 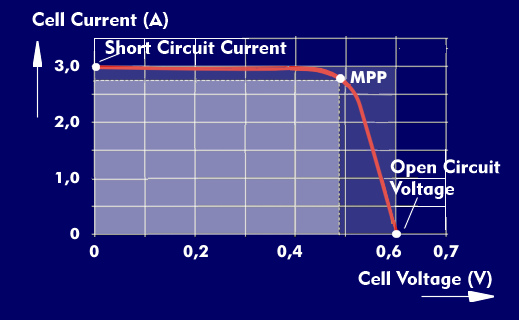 I-V characteristic of a solar cell

In addition to silicuim-based base materials, there are already solar cells made of other semiconductor compounds such as cadmium telluride( CdTe), copper indium selenide( CIS) and gallium arsenide( GaAs), as well as those based on organic photovoltaics (OPV) or dye cells. The aforementioned materials are used in thin-film solar cells, but their efficiency is much lower than that of silicon solar cells, ranging from about 6% to 10%.

The development of solar cells is aimed at improving efficiency. Corresponding designs work with anti-reflective layers, surface structures with roughened surfaces, with a back side field as in the PERC solar cell as well as the CPV solar cell in which the light is bundled via lenses. 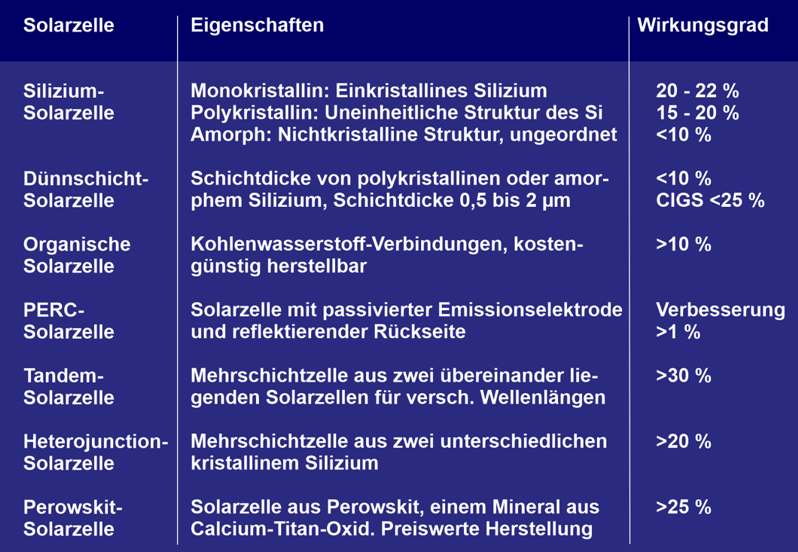 Solar cell variants and their efficiencies

In addition, there is a decisive factor with which the efficiency of solar cells can be improved. This is the dependence of the semiconductor material on the wavelength for the light yield. For crystalline silicon, the wavelengths with the highest light yield are between 600 nm and 900 nm. That is, from red light to the infrared range. This means that short-wave light and UV light do not contribute to the light yield of silicon and thus to electricity generation. This disadvantage can be overcome by solar cells made of two or more different semiconductor materials. These include heterojunction solar cells, tandem solar cells, and perovskite solar cells. The latter offer a cubic crystal structure and production advantages. Perovskite is a naturally occurring mineral of calcium titanium oxide. Efficiencies of over 25 % have been achieved in the laboratory with perovskite solar cells.