The abbreviation SDSL is used for various systems: for Single Pair DSL, a DSL system for a pair of conductors, as well as for Symmetrical DSL, a system with symmetrical bit rates standardized by the European Telecommunications Standards Institute( ETSI).

SDSL is a method for full- duplex transmissions with symmetrical transmission rates of 192 kbit/s to 2.304 Mbit/s, with the data rate being adjustable in 64-kbit/s increments starting at 192 kbit/s. With these data rates, the T1 line can be adapted at 1.544 Mbit/s and the E1 line at 2.048 Mbit/s. Transmission takes place on a copper twisted pair, the maximum distance is 3.5 km. 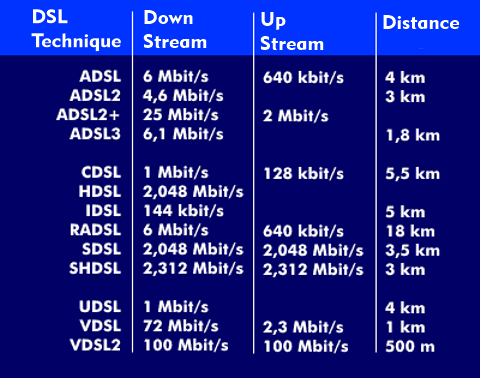 A new standardization project has been started at ETSI for SDSL, in which lower transmission rates than 2.048 Mbit/s should also be possible. The transmission rate is to be adapted to the transmission capacity of the access line by means of bit rate adaptation. To increase the range, trellis-coded PAM modulation is planned as the line coding, which is called Ungerboeck coding, after the inventor of trellis coding. In SDSL, coexistence with POTS and ISDN is provided, by multiplexing into the SDSL data stream.

SDSL is particularly suitable for intranet applications such as LAN coupling or video conferencing and is predestined for teleworkers and SoHo applications.