Read/write (R/W) heads are tiny electromagnets, manufactured using microsystem technology, which are used in hard disk drives and removable disk drives. They are located at the end of the pivoting access arm. The electromagnets consist of an open soft iron core that has a tiny air gap of about 0.1 µm and is surrounded by a coil. The head gap width is made as small as possible because it has a direct influence on the storage density.

The magnetization of the storage surface of the hard disk is achieved by magnetic fields transmitted from the electromagnet via the head gap to the rotating hard disk. During the write process, when current flows through the magnetization coil, a magnetic field is generated that passes from the air gap into the magnetizable ferrite layer with its elementary dipoles and aligns them in a specific direction. Due to the remanence of the small ferrite particles, they remain in their orientation until the direction of the current in the magnetization coil is reversed. During the reading process, the differently aligned elementary magnets generate an induction in the magnetizing coil, which is picked up as an induced voltage. 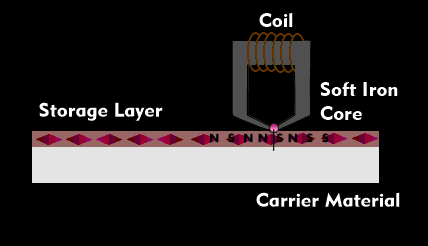 Structure of the read/write head