Peer-to-peer networks( P2P) are computer networks in which all computers in the network work together on an equal footing. This means that each computer or server can offer functions and services to other computers and, on the other hand, use functions, resources, services and files offered by other computers. Data is distributed among many computers.

The peer-to-peer concept is a decentralized concept, without central servers. Each computer in such a network can be connected to several other computers. Simple peer-to-peer networks organize themselves, as Self Organized Networks( SON), they work in a decentralized way and have no server. In such a decentralized peer-to-peer network, workgroup members provide each other with operating equipment and resources. Since there can be hundreds of user computers involved, it is hardly possible to identify the individual user computers, especially since their names are encrypted. There is no information about the paths to a target system on which desired data is stored. Since only the target system has information about the stored data, in unstructured networks the search queries are done by flooding. It is different with structured peer-to-peer networks. which store routes to specific data on individual terminals. 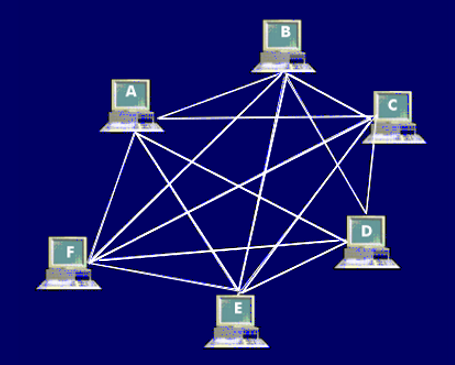 Computer connections in a peer-to-peer network

Peer-to-peer networking is suitable for smaller workgroups. In such an environment, each employee can allow his or her partners to access operating resources such as hard disks or printers. The individual peers share data in file sharing. In the context of the Internet of Values, peer-to-peer networks are used for distributed ledger technology( DLT) or blockchains. These applications involve the decentralized distribution of ledgers of accounts across many servers. 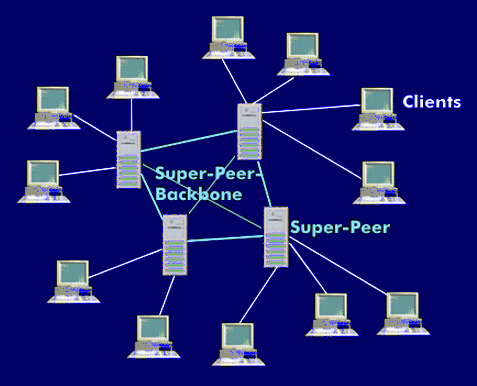 Configuration of a super-peer network

A further development of the peer-to-peer network with centralized server components are super-peer networks. In such a configuration, particularly powerful peers are grouped together to form super-peers, which provide the server services and organize the network. They take care of routing the data to the decentralized clients and form a backbone network in themselves.

On the Internet, there are various super-peer configurations known as anarchic networks such as Skype for Internet telephony, as well as the net-within-a-net concept Gnutella, file-sharing networks such as Kazaa, Napster and BitTorrent for file sharing and downloads.