Hard disks are preformatted by the manufacturer, either according to the CHS structure(Cylinder, Head, Sector) or, in the case of modern SCSI and ATA hard disks, according to Logical Block Addressing( LBA).

In contrast to the CHS method, which is hardly used any more, the LBA method is not based on the geometrical arrangement of the sectors, but numbers them from LBA-0 via LBA-1, LBA-2 etc. to LBA-n. All sectors have the same size. Whereby all sectors are of the same size. 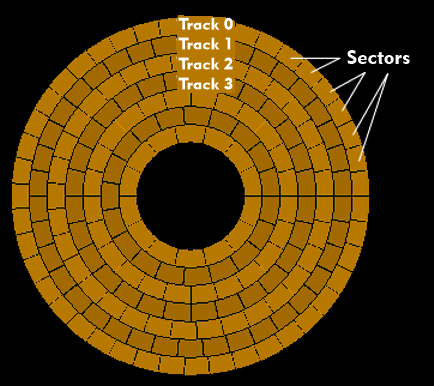 Hard disk formatted according to the LBA method, with sectors of the same size.

The LBA addresses are administered in the operating system or in the file system and converted in the hard disk controller into a corresponding physical storage space. This is uniquely determined by the sector, the cylinder and the read/write head.

The LBA method has an address space of 28 bits for ATA interfaces in almost all versions and thus a manageable hard disk memory of 128 GB. The expansion of the address space to 48 bits with Ultra-ATA results in a manageable storage capacity of over one hundred petabytes( PB).