The term luminance is one of four basic quantities of lighting technology. The others are luminous flux, luminous intensity and illuminance. Luminance is used in lighting and display technologies.

Luminance is the intensity of light in relation to a unit area, expressed in candela per square meter( cd/m2). It is the visible light emitted by a light emitting diode or a display in a certain direction or reflected by bodies. 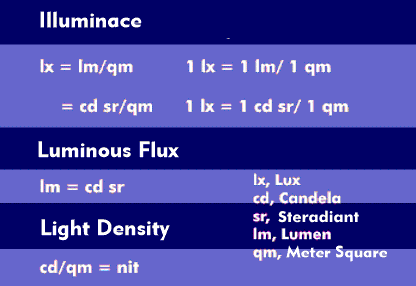 Luminance is also frequently expressed in nits. This is the specification commonly used in the USA, derived from the Latin word nitere, which means to shine. The nit refers to the luminous intensity, expressed in candela (cd) in relation to a unit area: 1 nit is equal to 1 cd/m2. In addition, the obsolete dimensionfootlambert( fL) is also used in the USA for luminance. Where 1 footlambert is equal to 3.426 cd/m2 or 3.426 nits. Previously, luminance was expressed in apostilb (asb). 1 apostilb is equal to 0.31831 cd/m2.