Illuminance (E) describes the light energy incident on a reflecting body. It is expressed in lux( lx) and is calculated from the ratio of luminous fl ux and illuminated surface. It is measured with a luxmeter on horizontal and vertical surfaces. The illuminance depends on the light reflection in the room and, as far as working rooms are concerned, on the work that has to be done in these rooms. Bright rooms require lower illuminance than dark rooms.

Illuminance covers several powers of ten. In sunlight, there is an illuminance of `10^5` lux, which falls to 10 lux at dusk and `10^-5` lux at night, depending on the time of day. It is calculated from the luminous intensity in candela( cd) and the square of the distance between an isotropically radiating light source and the illuminated surface. For example, for a light source with a luminous intensity of 1,000 candela and a projection surface of 1 square meter located at a distance of 4 meters, this results in an illuminance of: '1,000 (cd)/4^2', which corresponds to 66 lx. 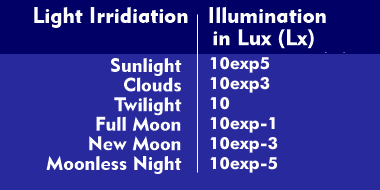 Illuminance at different incidence of light

Illuminance is of interest wherever safety and illumination of surfaces, rooms and workplaces are concerned. For example, in the lighting of stadiums, traffic routes, stairways, corridors, storage rooms, warehouses, offices and salesrooms. For the above-mentioned rooms, minimum limits for the nominal lighting in lux are specified in the workplace guidelines according to DIN 5035. These guidelines specify, among other things, illuminance levels of 500 lux for sanitary rooms, 50 lux for storage rooms and 100 lux for stairways.