In terms of construction, the double-layer capacitor differs from electrolytic capac itors in that the electrodes are much larger and their distance from each other is much smaller. Both electrodes, the anode and the cathode of double-layer capacitors, consist of activated carbon, which is applied to the collectors. Between the two electrodes are the liquid electrolyte and a membrane, the separator, which protects the two electrodes against short circuits. While ions can diffuse through the separator, the latter forms a barrier for electrons. When a voltage is applied to the collectors, the positive ions move from the collector with the positive voltage to the negative electrode, and vice versa. There they form a wafer-thin dielectric, only a few molecular layers thick. An electric field forms between the charge carriers of the electrodes and the thin layer of ions, separating the two charge layers. 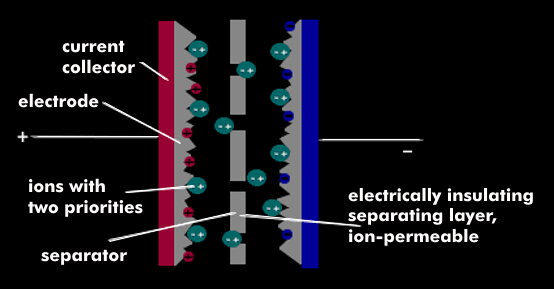 Structure of a double-layer capacitor such as the supercapacitor

The storable electric charge depends on the ions in the electrolyte and in the collectors. The dielectric between the collectors and the ion layer, which is only a few molecular layers thick, results in a high energy density, which is much higher than that of rechargeable batteries and can be in excess of 5 Wh/kg. The power density is between 2 kW/kg and 10 kW/kg. 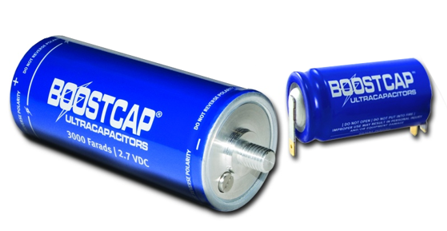 Double-layer capacitors can withstand several 100,000 charge cycles, they have a relatively long lifetime, an extremely low Equivalent Series Resistance( ESR) of less than 1 milli-ohm, and their self-discharge is less than 70 % after 2,000 h.

Like rechargeable batteries, double-layer capacitors are used as energy storage devices and as buffer capacitors for electronic circuits. They can withstand pulse loads and are also used in high- performance electric vehicles.