A wafer is a flat, approximately 1 mm thin round disc made of a semiconductor material that forms the basis for integrated circuits( IC). The wafer is the starting product for chip production. It is sawn with diamond saws from monocrystalline or polycrystalline silicon cylinders, the so-called ingots, which are grown as ultra-pure silicon crystals, with a purity grade of 99.9999999%.

The structures of many integrated circuits are exposed side by side on the wafers using lithographic processes such as DUVlithography or EUV lithography or by means of laser exposure. The number of chips projected onto a wafer depends on the chip size and wafer diameter. The aim is to optimize production technology and reduce manufacturing costs by producing as many integrated circuits as possible in one production run. For this reason, the wafer diameter has steadily increased over the years. At the same time, the laser and photochemical processing steps had to be adapted to the development and the integration density. Therefore, the first wafers had a diameter of only 1", corresponding to about 2.54 cm, which were later replaced by wafers with 4", 5", 6", 8" and 12" diameters, corresponding to 300 mm, which were called pizza wafers. The coming wafer generation has a diameter of 450 mm. The usable area will thus be larger by a factor of 2.25 than with the 300 mm technology. However, the diameter depends on the semiconductor material used. To minimize material loss, the thickness of normal wafers is 0.35 mm. For further material savings, there are thin wafers with a thickness of 200 µm. 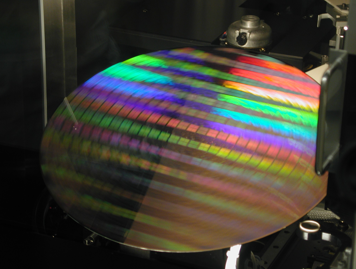 Many identical integrated circuits are deposited on such a wafer by various exposure, diffusion, doping, coating and etching processes. To save follow-up costs in the production process, the prefabricated chips are tested directly on the wafer. Defective chips are marked and not processed further. The flawless chips are processed further after sawing; they are bonded, assembled and individually encapsulated in the package. Before packaging, they are called die, in plural dice. 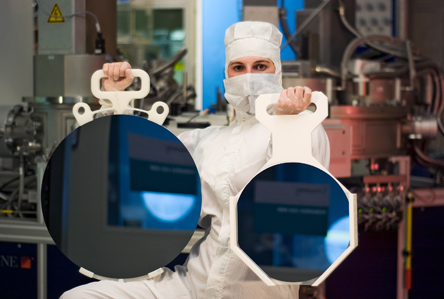 The number of wafers produced each month in wafer production is referred to as Megafab and Gigafab. If it is Megafab, then approx. 50,000 wafers are produced per month, with Gigafab it is about 80,000 to 100,000 wafers per month.