The product name "Pentium" stands for a superscalar 32-bit microprocessor generation from Intel. The first Pentium introduced in 1993 experienced a rapid further development and performance explosion in the following years and is the standard processor for PCs.

In 1993, the Pentium was still clocked at 60 MHz and had a computing power of 100 MIPS at this clock rate. At clock speeds of 133 MHz, the classic Pentium achieved 218 MIPS. In the technology, structure widths of 0.8 µm were initially realized, later 0.6 µm, 0.35 µm and for processors for mobile use also 0.8 µm. The processor has 3.2 million transistors and a physical memory area of 4 GB, the virtual memory area is 64 TB. 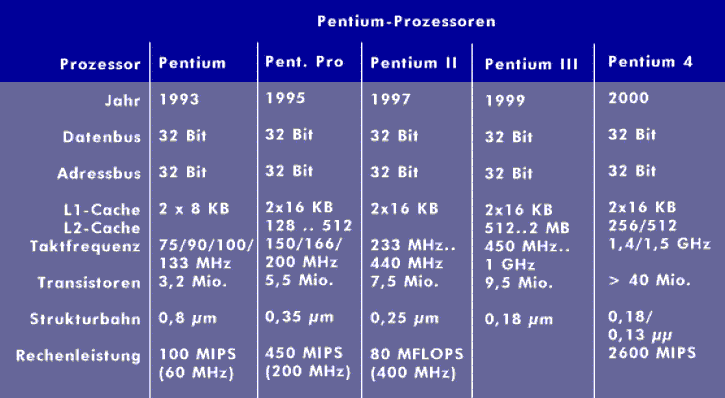 As a 32-bit processor, the Pentium has a 64-bit external data bus and uses RISC architecture for faster instruction execution. Thus, two instructions are processed per clock cycle. In the original version, the Pentium had two Level 1 caches with 8 KB each for data and instructions. The Pentium can be used in CPU sockets 4, 5 and 7, depending on the clock frequency.

The first extensions to the Pentium were for the MultimediaExtension( MMX) for processing audio and video.