The SDH frame of the first hierarchy level (STM-1) transmits a data frame every 125 µs, consisting of nine lines of 270 bytes each (9 bytes plus 261 bytes), which means 2,430 bytes in length. Each byte of the payload represents a 64 kbit/s channel. The gross transmission rate is 155.520 Mbit/s, which is transmitted over optical fiber using OC-3(Optival Carrier). The overhead is 90 bytes, which corresponds to a total overhead of 5.760 Mbit/s or 3.7 percent per frame. During transmission, the bytes are sent line by line one after the other. The repetition frequency of the data frame results in a repetition frequency of 8 kHz. Each byte of a frame has a transmission rate of 64 kbit/s. 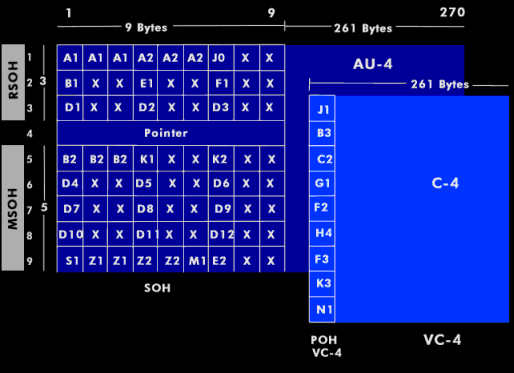