Supercomputers are giants among computers and represent the highest possible computing power. In terms of computer architecture, they are optimized for specific applications to achieve the highest possible processing power. They are always parallel processing systems, multiprocessor systems, vector computers or computer architectures with Multiple Instruction Multiple Data( MIMD) and Single Instruction Multiple Data( SIMD). The computing power of these super machines is expressed in teraflops (TFLOPS) and even petaflops (PFLOPS), which are `10^15` floating point operationsper second( FLOPS).

The computing power of supercomputers

Development of the computing power of supercomputers

The constant development of powerful supercomputers is reflected in the annual rankings published by a wide variety of institutions. Since the rankings are constantly changing, only a snapshot is possible at this point.

In 2011, the ranking of the top 500 was led by the Japanese supercomputer, K-Computer, with a peak performance of 8 petaflops per second (PFLOPS). In 2016, the most powerful supercomputer, Sunway TaihuLight of Wuxi, China, had a lest capability of 93 PetaFlops. Many supercomputers use Massive Parallel Processing( MPP) with tens of thousands of dual-core processors.

Other supercomputers are in the hundreds of TeraFlops per second (TFLOPS). For example, IBM's supercomputer, with more than 130,000 PowerPC processors, is at 280 TFLOPS, and NEC 's Earth Simulator, with 5,120 vector processors, offers a peak computing performance of 36 TFLOPS. ASC Purple achieves 63 TFLOPS with 10,240 Power5 processors. 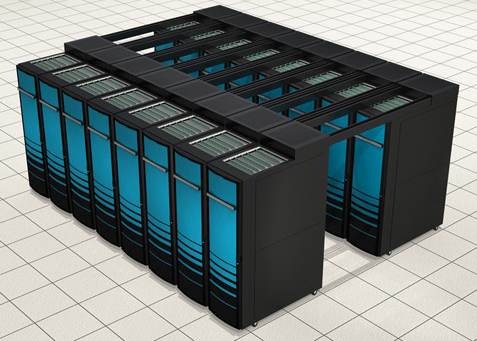 Supercomputer XT4 from Cray with a computing power of 1 PFLOPS.

Supercomputers are used when extensive and highly parametric numerical problems have to be solved in the shortest possible time, such as for weather forecasting, in climate research, for real-time evaluation of highly structured moving images, as central computers for complex defense systems, in solid-state physics, space research, simulation and crash technology, graphics calculation of film sequences, etc.