The Sub-D connector has its name from the shape similar to the letter "D". It is standardized by ISO, DIN (41652) and as MIL standard (24308) and is called Sub-D connector, D-Sub connector or D-Subminiature. The term subminiature originates from the development year 1952. The sub-D connector was relatively small by the standards of the time; in the meantime, the D connector form already exists in several miniaturized designs as a micro-D connector or also as a nano-D connector.

The standardized designation for Sub-D connectors consists of the letter "D", another letter for the connector size A, B, C, D or E, a number indicating the number of pins and a letter identifying the plug or socket.

The different versions of the Sub-D connector

Structure of the Sub-D connector

The Sub-D connector consists of two or three staggered rows of pins surrounded by a D-shaped metal guard that provides electromagnetic shielding. In addition, the D-shape has the advantage that the connector cannot be inserted the wrong way around. A D connector consists of the plug with the connecting pins, the male (M), and the socket with the plug contacts, the female (F). The metallic outer protection of plug and socket is connected to the protective conductor 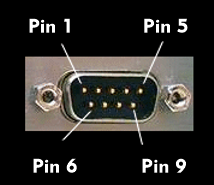 In the case of the Sub-DE-9 data connector (ISO 4902/ RS-449), which is used in the distribution area, in personalcomputers( PC) as a COM port, in the LAN- ATM area or in the IBM cabling system on the connecting cable, among other things, the contact pins are arranged in two parallel rows with 5 or 4 pins. The connector is guided by a stable metallic outer ring, which also provides shielding. 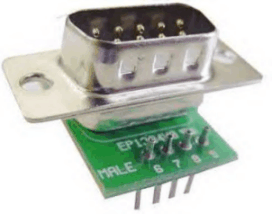 The DE-15 connector (ISO 4903) is used, among other things, as a connector for the AUI interface, in the User Network Interface( UNI) for X.21 and X.25, for the COM port, and for composite video and component video.

The DB-25 (ISO 2110) according to DIN 66258 T1 and RS-366A is used at the RS-232 interface and at SCSI. The 37-pin version has been standardized by the International Standards Organization (ISO) under ISO 4902 and by the Electronics Industry Association( EIA) under RS-447. This DC-37 is used in the primary channel. The 50-pin version is available in the normal version for SCSI I and in a miniature version for SCSI II.