Since the computing power of processors can hardly be increased via a higher clock rate, processor architectures are used instead in which several independent processors are integrated as a network on one chip. This ensures higher computing performance and higher data throughput and leads to more efficient utilization of the individual processors and memory. The quad-core concept is the second step after the dual-core processor towards multi-core process ors with eight, sixteen or more processors. 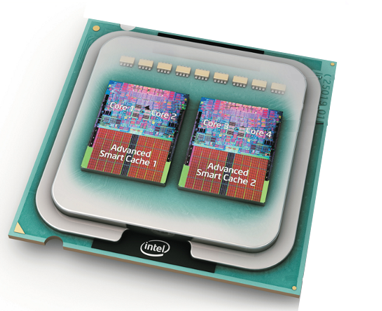 The QX6700 consists of two dual-core processors located on one substrate. In total, such a quad core processor with the level 2 caches has 290 million transistors. There are 775 contacts on the bottom of the Dice for the electrical connections and the connection to the motherboard and the chipset. The QX6700 is based on Intel's Core microarchitecture and supports various features such as Wide Dynamic Execution, Smart Memory Access and Intelligent Power Capability. In 2008, another powerful quad-core processor, the Core i7, was added.

Multi-core processors are used in desktops, but also in smartphones and tablets.