The term ping time, also known as round trip time( RTT), is therefore better described in terms of response time. It is mostly used in the context of response time behavior for actions on the Internet. The subscriber networks used, such as the access networks with DSL procedures, are decisive here. Excessive ping times impair the quality of Internet telephony and the response times ofonline games.

Ping times and their reduction 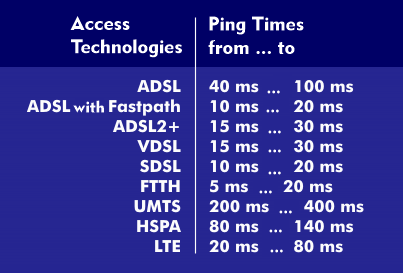 With the various DSL technologies, the ping time depends not only on the DSL procedure, but also on the provider. Ping times are measured according to the ping method or the ping-pong method. In this process, a server or master sends a ping character to the client, which responds with a pong character. Ping times in the range of 10 ms are considered very good and are achieved via leased lines, Symmetric Digital Subscriber Line( SDSL) and optical access networks. Otherwise, ping times range from 30 ms to 400 ms, depending on the DSL technology and interleaving forISDN. To shorten ping times, Fastpath was developed for DSL technologies. It works without interleaving and without error correction and more than halves ping times.

The ping time is directly influenced bythepropagation time of the signal. If, for example, there is a distance of 10,000 km between client and server, this distance is included twice in the propagation time: for the outward and the return leg. Such a distance alone would be included in the ping time at 66 ms for transmission at the speed of light. High ping times negatively affect Internet services. For example, ping times for Internet telephony should not exceed 30 ms and for online games it is 60 ms. In addition, a short ping time is externally important for fast Internet surfing. For satellite Internet via a GEO satellite, the ping time reaches values between 300 ms and 900 ms. Internet telephony is no longer possible with these delay times.