Nickel-metal hydride(NiMH) batteries are powerful rechargeable batteries used in small electronic devices such as digital cameras, cell phones, palmtops, etc. Their service life is over 1,000 charging cycles, their energy density is about 100 Wh/kg and their power density is up to 750 W/kg. NiMH batteries are characterized by their ability to generate high and constant currents over a long period of time.

The anode of a NiMH battery, which is the negative electrode, consists of a metal hydride powder deposited on a pinhole and serves as a hydrogen storage. The cathode, which is the positive electrode, consists of a nickel oxide hydrate sheet. Between the two electrodes there is an alkaline electrolyte as a separator, which serves as an ion conductor. When current is drawn from the NiMH battery, the hydrogen at the anode oxidizes and reacts with the electrolyte to form water. The electrolyte provides transport for the ions that are released or absorbed during the chemical reaction with the electrodes.

Structure of a NiMH battery

The nickel is reduced by the chemical reaction at the cathode. The charge is balanced by means of cations via the electrolyte. The anode releases the current flow to the outside by converting anions into electrons.

The NiMH battery has a nominal voltage of 1.2 V, it is capable of deep discharge, sensitive to overcharge and has a long shelf life and durability when discharged. The final charge voltage is 1.4 V, the final discharge voltage is 0.85 V to 0.9 V, and the charge current is 1C. 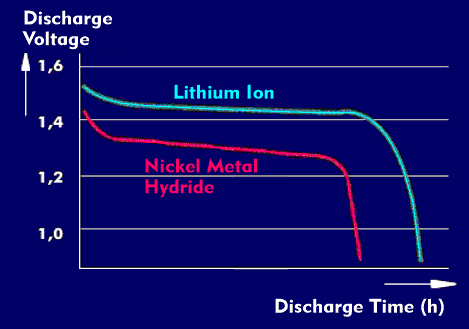 A disadvantage is the relatively high self-discharge. In the meantime, there are developments such as LSD NiMH batteries(Low Self Discharge) whose self-discharge in the first month is approx. 15%, in the following months there is only a low self-discharge of a few percent.