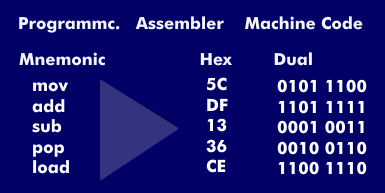 Conversion of the mnemonic program code into machine code

Each processor architecture has its own instruction structure. The instructions executed are controlled by the firmware. Programs written in assembler or in another programming language must first be translated into the used machine code via an assembler, compiler or interpreter.