There are various techniques to create electronic audio effects. Flanger is such a technique, comparable to phaser. In the flanger process, the audio signal is fed through two paths and mixed again.

In a flanger process, one path has no delay, the signal is fed to the mixing stage unchanged. The second method has a delay with which the signal is periodically varied, but only in a small delay range between 1 ms and 20 ms. This periodic delay is generated with a Low Frequency Oscillator( LFO). 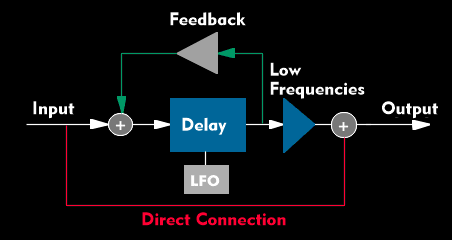 Structure of the flanger with direct and delayed signal path

Both signals, the undelayed and the delayed one, are mixed again in the mixing stage. Due to the delay of one signal, a comb filter effect with interference is created, resulting in a flowing audio effect where some frequencies are attenuated and others are amplified. The flanger circuit also has a feedback loop that can be used to vary the strength of the flanger effect.

The flanger effect can be used to emphasize spatial sound by creating a pseudo- stereo signal from a monophonic signal. Flanger effects are preferably used with guitars, drums and cymbals.