Physically, the self-luminous field emission used in Field Emission Displays (FED) is based on the extraction of electrons from a cold cathode. At sufficiently strong electric field strengths, electrons can be released from a solid atomic bond. The required field strength is about `10^9` V/cm.

The advantage of the FED technique over the VFD (Vacuum Fluorescence Display) technique is that no heating is required for the cathode to release the electrons from the cathode. In terms of construction, the FED elements have a grid for current control and an anode coated with the phosphor in addition to the cathodes, which are formed from a pointed cone. The whole assembly is only about 2.5 mm thick. 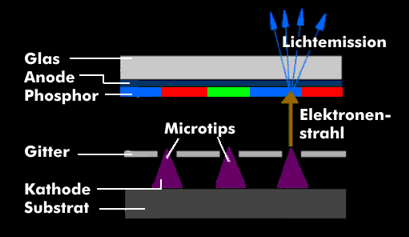 Structure of a FED display with microtip electrodes

The field emission principle is used in MFD displays(Microtip Fieldemission Display) and offers several advantages over other displays, such as lower power consumption compared to the VFD display and much shorter response times, which make this technology attractive for video as well. They are only about one-tenth of the response times of LED displays and cathode ray tubes. In addition, production engineering factors play a significant role, as the production of FED and MFD displays requires much less effort compared to other display technologies.

If carbon nanotubes, Carbon Nano Tube( CNT), are used instead of the pointed cold cathodes in the FED technology, then the display technology is a Nano Emission Display (NED).