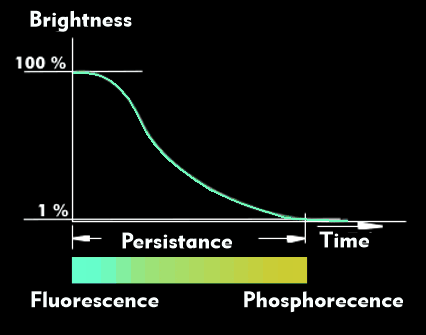 Fluorescence and phosphorescence of phosphors

Another parameter of phosphors is the afterglow time. This is the time in which the emitted brightness drops to 1% of the original value. It can range from a few microseconds to a few seconds. 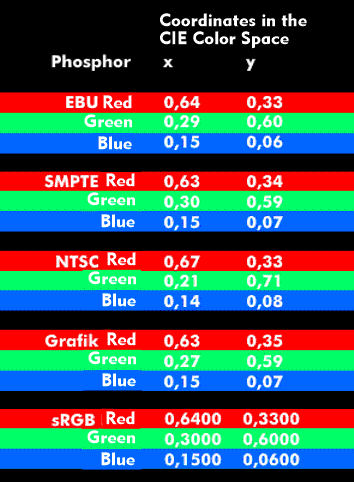 Phosphor colors of the different panels and their xy-coordinates

The different phosphors are typified with their properties by the Joint Electron Device Engineering Council( JEDEC). In addition, the phosphors used in displays and television screens have their hues specified by the various standardization bodies according to the CIE color space. Thus, the hues used by the European Broadcasting Union( EBU), by the Society of Motion Picture and Television Engineers( SMPTE), in NTSC or in graphic displays differ slightly from each other. As an example, red has the xy coordinates 0.64/0.33 in the PAL television standard in the CIE color space, 0.635/0.340 in SMPTE, and 0.67/0.33 in NTSC. In addition to television sets and displays, cathode ray tubes are also used in photoluminescent radar screens and oscilloscopes.

Phosphorus is also used for doping semiconductor material. Phosphorus has five valence electrons, so it is 5-valent, and is used as a donor for silicon, which is 4-valent. The five valence electrons of phosphorus form an atomic bond with the four outer electrons of silicon, leaving one phosphorus electron unbound and available as a free charge carrier. This doping thus results in an n-type conductor with free conduction electrons.