In terms of low- voltage mains current, the change over time takes the form of a sinusoidal oscillation rotating around a zero line. In this function, the alternating current rises sinusoidally from zero to the positive peak value, then falls sinusoidally, crosses the zero line, continues to fall to the negative peak value, and then rises to zero. This repetitive function repeats itself regularly. Of course, alternating current could also have another function. For example, a half-wave function as it appears after rectification. 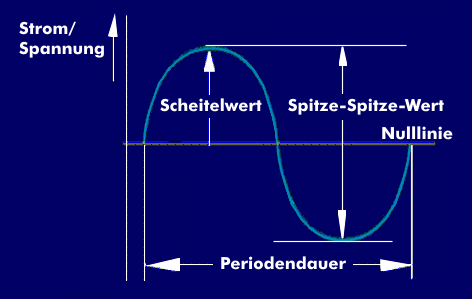 Alternating current using the example of a sine function

As far as the frequency or the period is concerned, the term alternating current applies to all frequencies. However, it is mainly used for the mains frequency, which in Germany is 50 Hz, corresponding to a period of 20 ms. In the USA and Canada it is 60 Hz.