10GBase-LX4 is a 10GbE interface. According to the Ethernet nomenclature of10 Gigabit Ethernet, it is an optical fiber interface for local area networks( LAN) that multiplexes four lanes in Coarse Wavelength Division Multiplexing( CWDM) in the wavelength range of 1,310 nm.

According to the IEEE nomenclature, the letter "L" in the extension LX stands for "Long" and the "X" for local area networks (LAN) and an 8B/10B coding. As optical fibers, the 10GBase-LX4 can use 50/62.5 µm multimode fibers or single- mode fibers that transmit the light signals from four VCSEL lasers at a baud rate of 3.125 Gbit/s per lane.

10GBase-LX4 deviates slightly from the wavelengths specified in the ITU grid. Instead of the 25 nm spacing, the four channels have a wavelength spacing of 24.5 nm. This is why the term WWDM is used instead of CWDM. 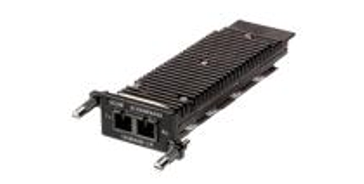 The range for multimode fiber is 300 m. The OM classes of the multimode fibers are OM1 and OM2. A VCSEL array or a DFB laser is used as the light source, whereas 10 km can be bridged with the single-mode fiber. The 10GBase-LX4 interface is therefore interesting for applications where both multimode and monomode fibers are used.